By Prof Pok November 29, 2013
I've always found this post to be a powerful story and graphic. After reading the article, try to answer the question whether you think it matters where on the income scale our representatives come from?

The wealth gap between younger and older Americans has stretched to the widest on record, worsened by a prolonged economic downturn that has wiped out job opportunities for young adults and saddled them with housing and college debt.

While people typically accumulate assets as they age, this wealth gap is now more than double what it was in 2005 and nearly five times the 10-to-1 disparity a quarter-century ago, after adjusting for inflation.

The analysis reflects the impact of the economic downturn, which has hit young adults particularly hard. More are pursuing college or advanced degrees, taking on debt as they wait for the job market to recover. Others are struggling to pay mortgage costs on homes now worth less than when they were bought in the housing boom.

And it's clear that politics will prevent any help from coming out of Washington any time soon:

Tragically, the more entrenched the jobs shortage becomes, the more paralyzed Congress becomes, with Republicans committed to doing nothing in the hopes that the faltering economy will cost President Obama his job in 2012. Last week, for instance, Senate Republicans filibustered a $60 billion proposal by Mr. Obama to create jobs by repairing and upgrading the nation’s deteriorating infrastructure. They were outraged that the bill would have been paid for by a 0.7 percent surtax on people making more than $1 million.

Outrage is relative, as I hope many senators are going to learn in November 2012. Senate Republicans, in fact Senators in general, are not even remotely representative of their constituents economically speaking [via Sullivan]:

According to a Roll Call analysis of Congress members’ financial disclosure forms, the collective net worth of American lawmakers jumped 25 percent to over $2 billion in just the last two years — with 50 of the richest Congressmen and women accounting for 90 percent of the increase.

In 2008, the minimum net worth of House Members was just over $1 billion. In 2010, it rose to $1.26 billion. Senators experienced a more modest increase during this same time period, going from $651 million in 2008 to $784 million last year. Roll Call notes that the real net worth of individual members is likely higher, since their estimates do not take into account non-income-generating properties such as private homes. 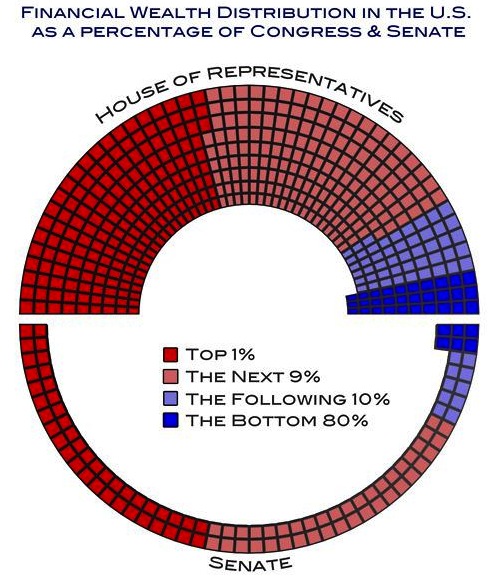 Looking to people who are not part of the 99% (allow me the short-hand this one time, if you will) to represent the concerns of the 99% strikes me as a significant form of idiocy. It's asking our leaders to vote against their own personal best interests. Since I don't think it's sensible to ask anyone to vote against their own personal best interests, one obvious solution would be to vote and vote again until the legislature is more truly representational (in terms of background, wealth, education, and religion) of the public at large.

Popular posts from this blog

some people you didn't know who spent time as "illegal immigrants"

By Prof Pok September 30, 2013
Read about them at ABCNews.com: http://abcnews.go.com/ABC_Univision/salma-hayek-celebrities-broke-us-immigration-law/story?id=18367374
Read more

A short video on the Asian American "model minority" myth and why it matters.  comes from The Occidental
After watching the video, what are some problems you see about the model minority?
Additional reading:
'Model Minority' Myth Again Used As A Racial Wedge Between Asians And Blacks
Read more

In addition, here are two more migration maps from CNHI: